Using miles to fly Susan and I in biz on this mini round the world trip (except for some local flights, e.g. UAE to Jordan and back)..

Have a day stop in Istanbul (twice!?) where it’s easy to zip into town. Since I missed the Grand Bazaar last time!

My Android phone had 39 app updates!

Though even now I’m having problems posting photos to my blog from my phone, which might have been due to an app update while I was in Japan, and not just a connection speed.

On an ANA one, which has a 2-4-2 configuration, unlike UA and AC which cram 9 seats across instead of 8.

I thought the new window was larger than it is… Basically it’s a little taller than a regular window.

Since it’s a new month, the are a few new movies in the personal seatback entertainment system versus my ANA flight last week (this us an evening flight so no sleeping).

The washroom door cantilevers around a third of the width, and there is a light above the door indicating occupancy. But why is there a little ashtray when it’s new and non-smoking, and above the seats they didn’t bother with a no smoking sign.

The washroom also has a touchless faucet and flush, the latter makes the toilet lid go down automatically.

Overall I can’t say the plane feels much different and is overhyped. Sigh. 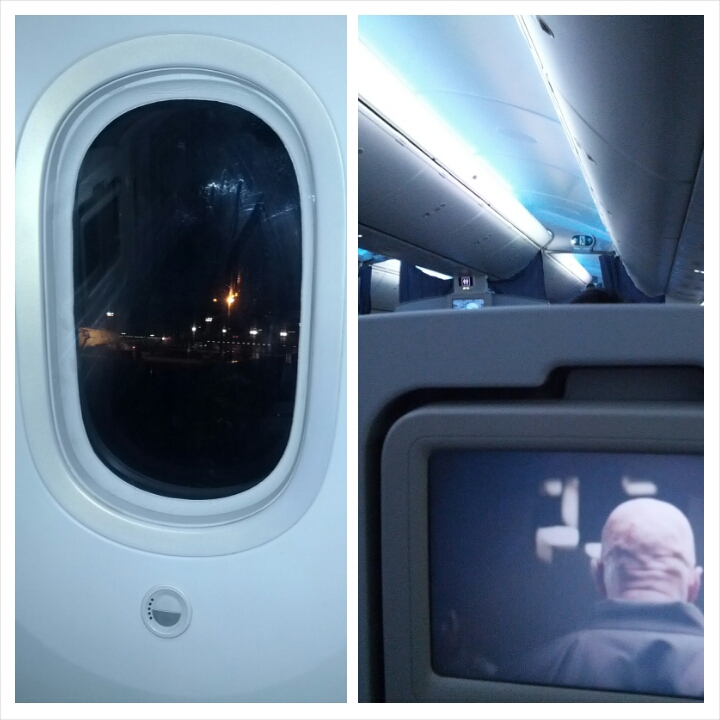 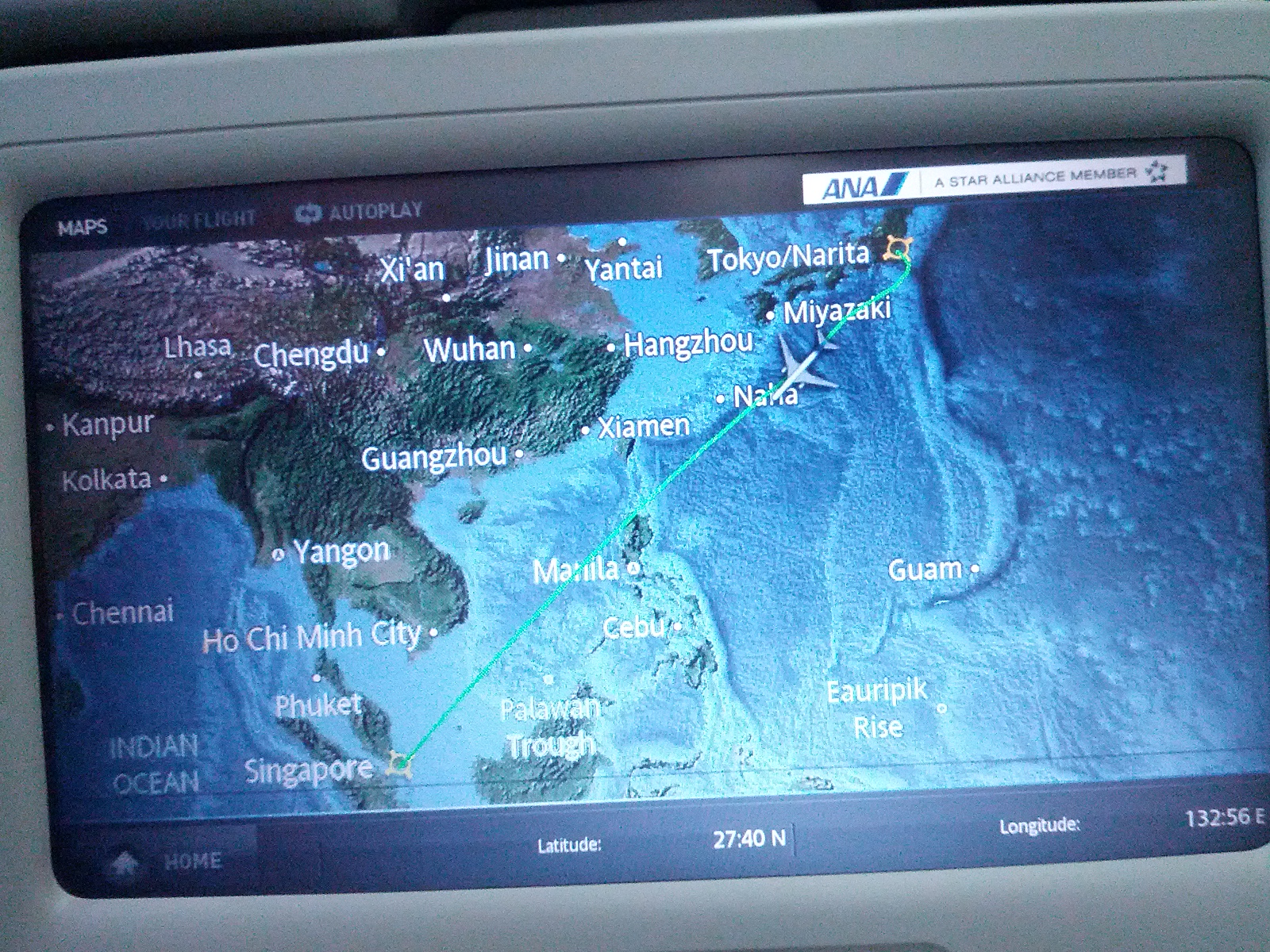 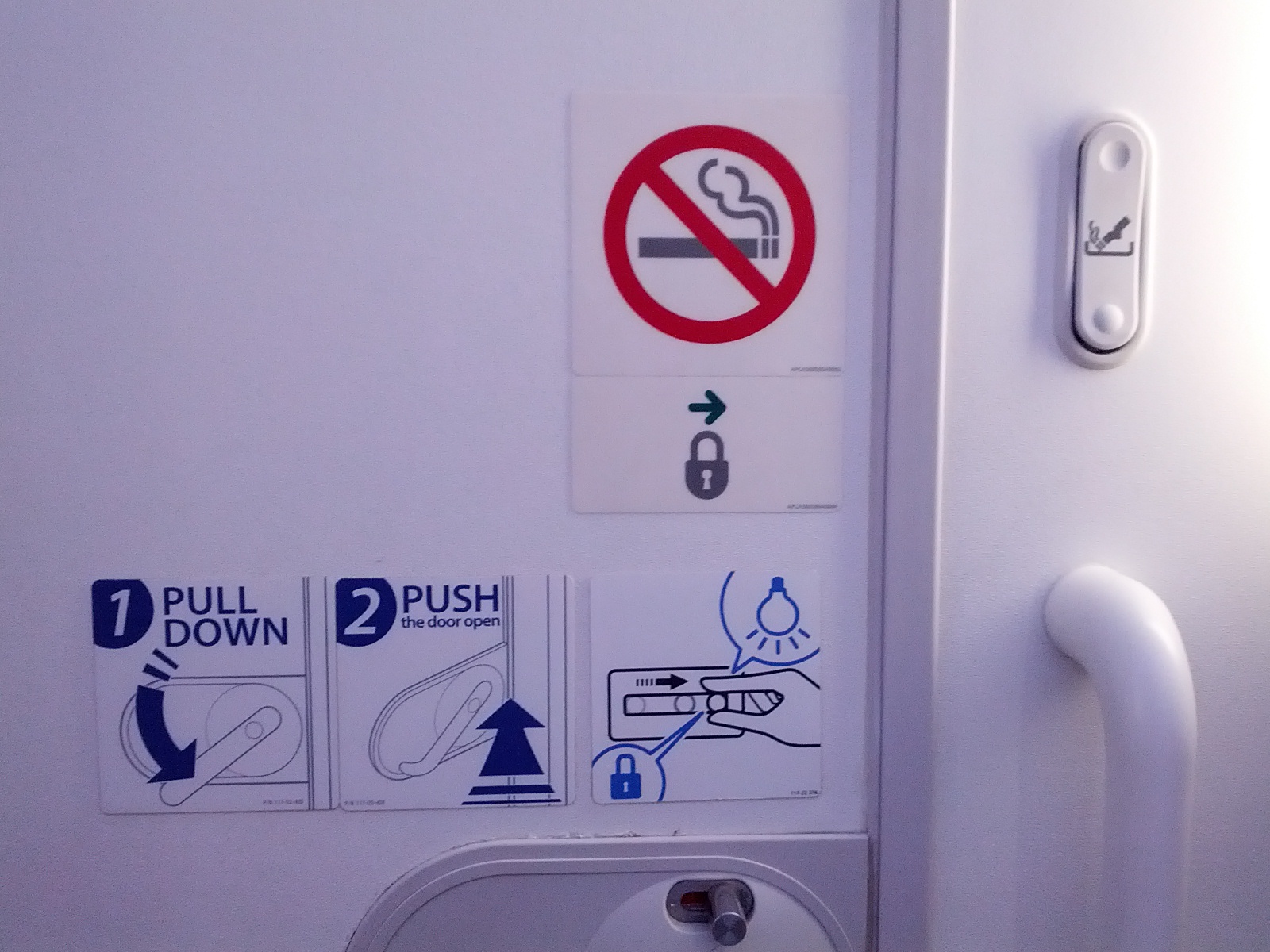 First time I’ve seen it clearly.
Perfect timing on the last photo… From the shinkansen on the way to Tokyo. 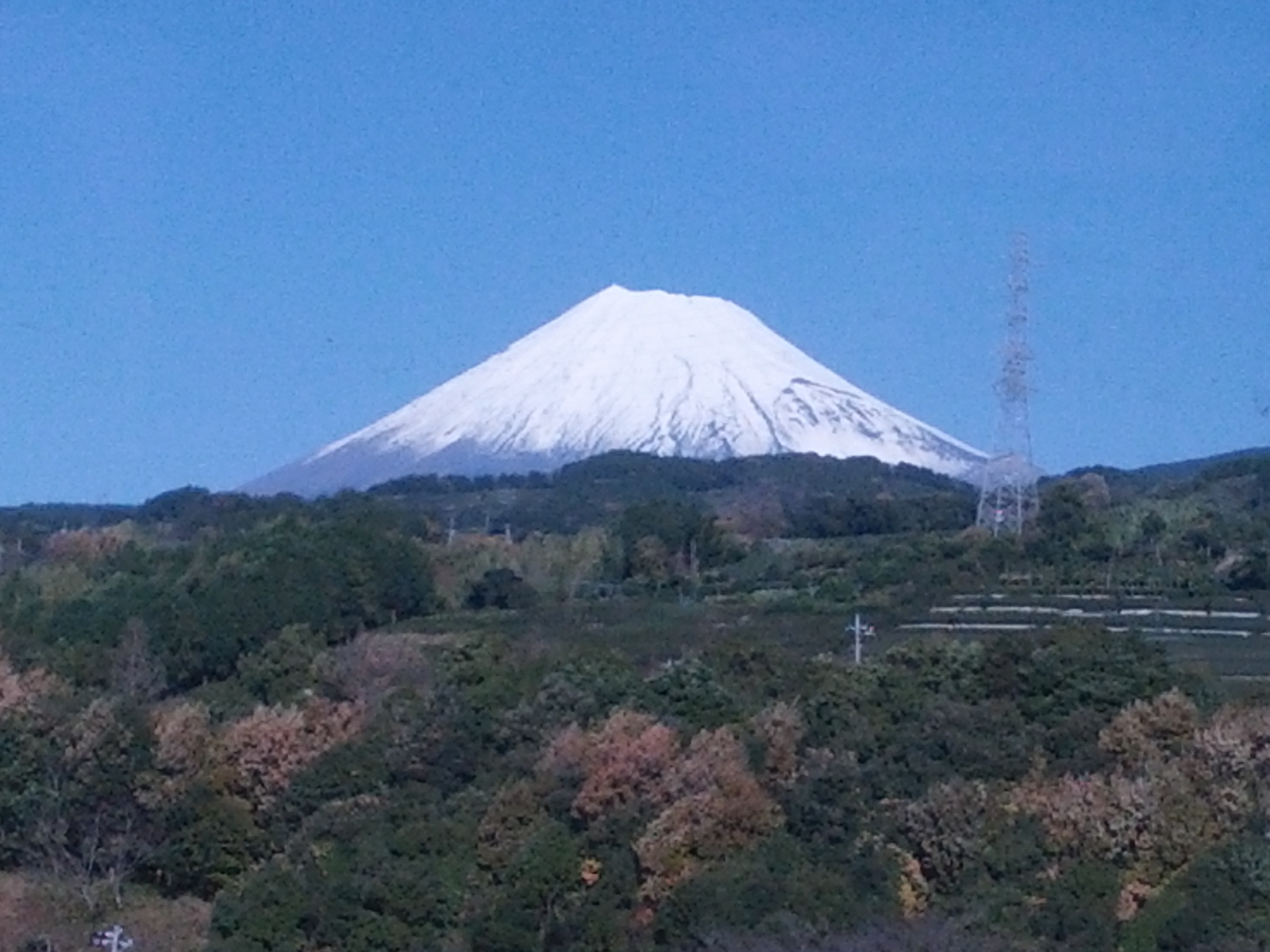 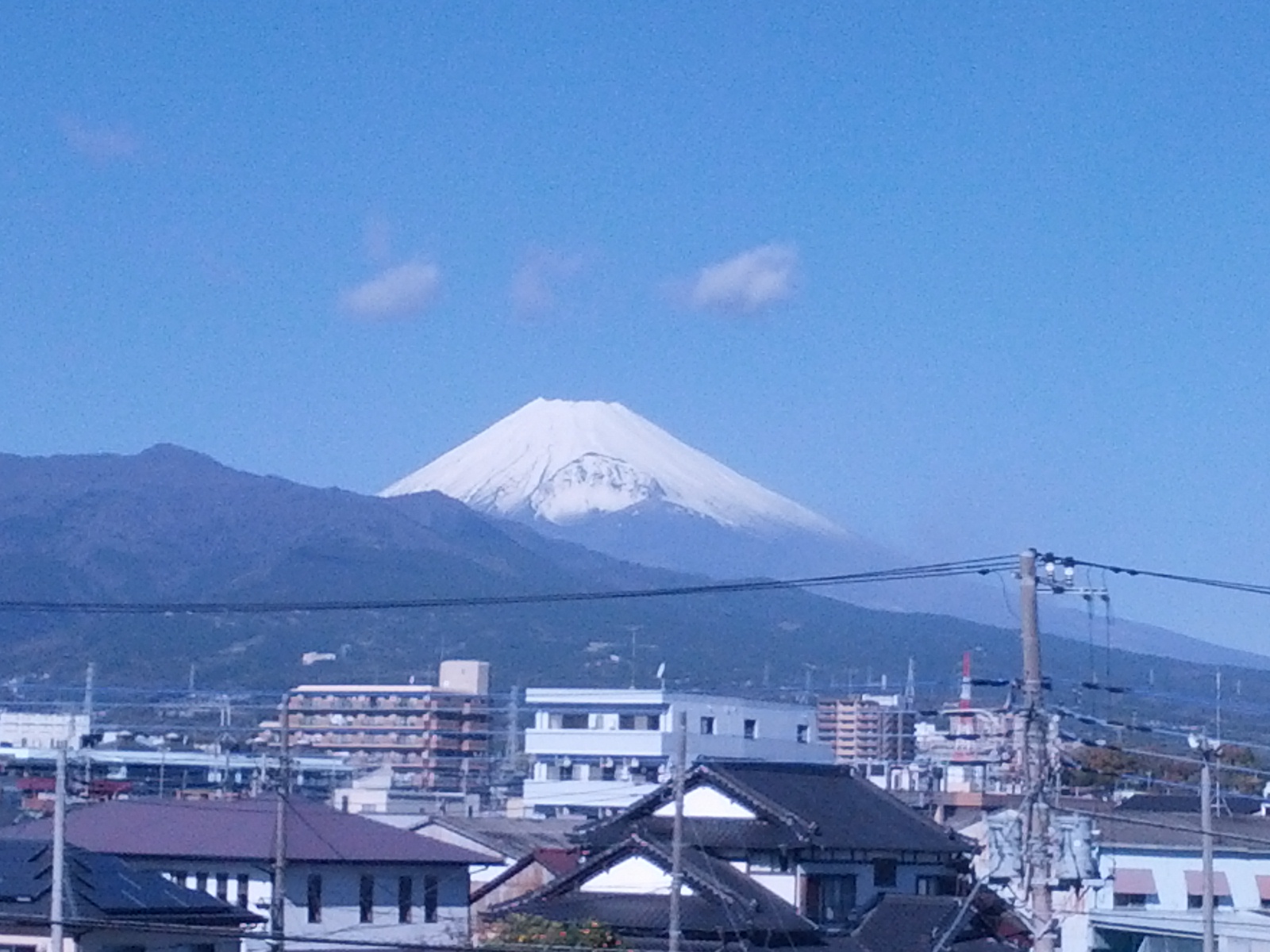 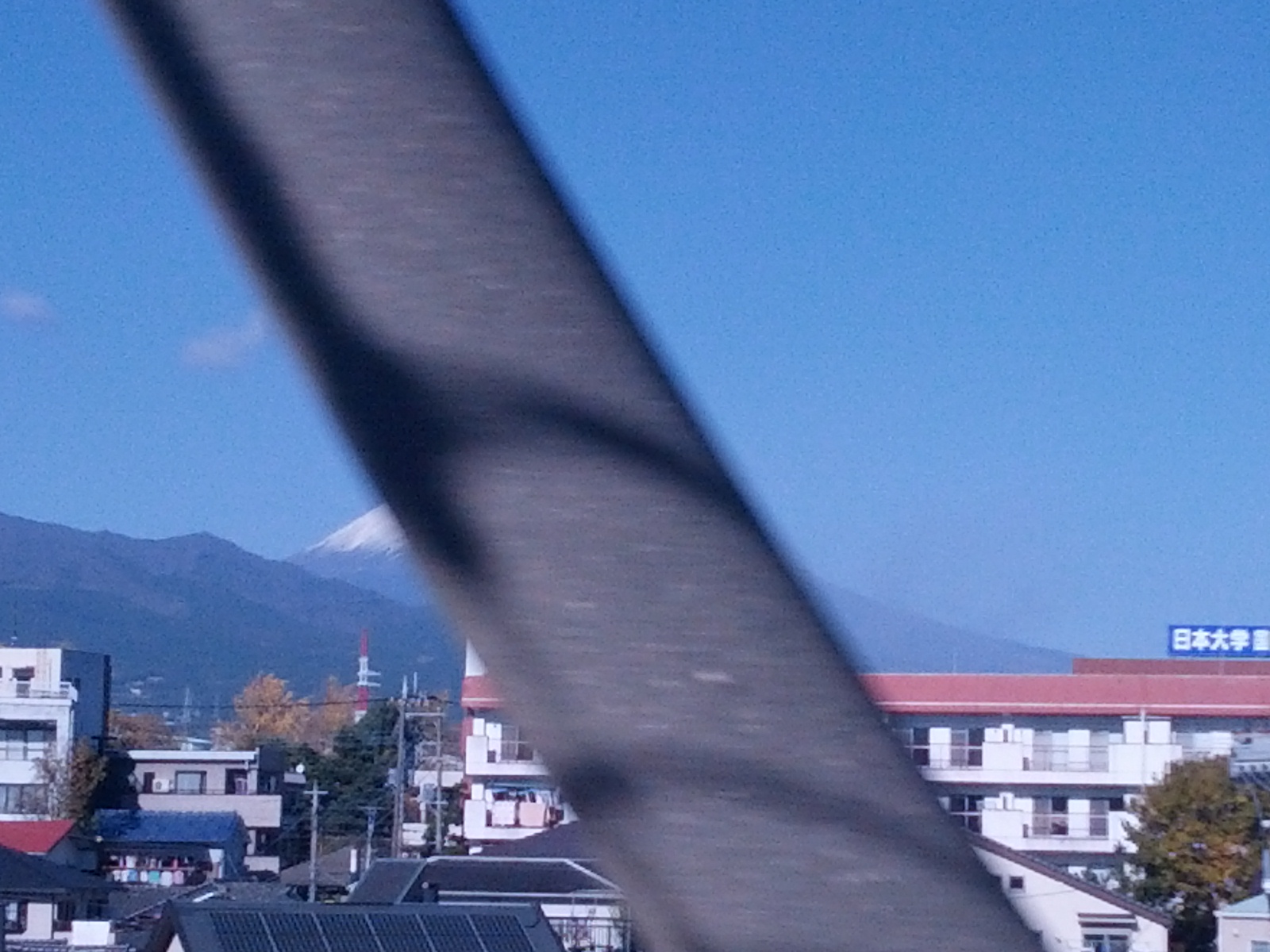 A few more sushi pics, plus Junko in Kobe 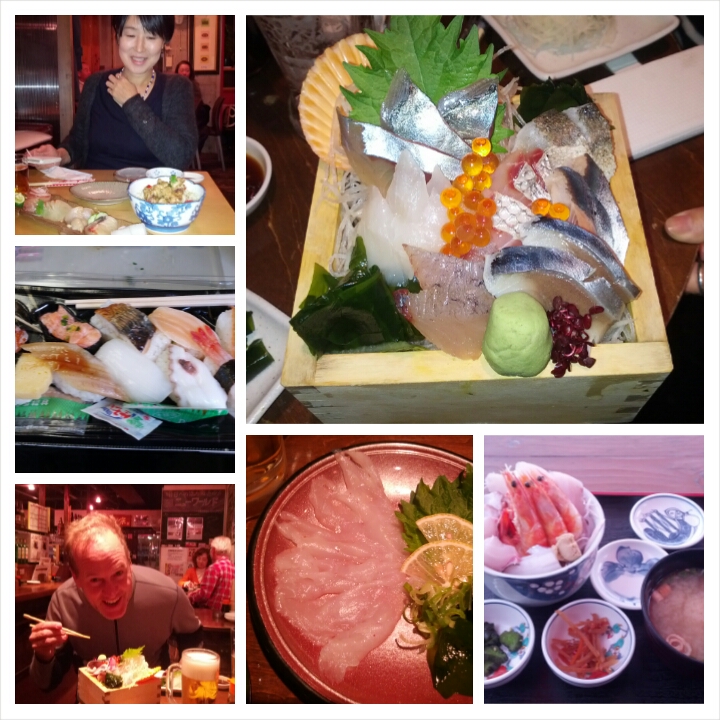 More deets and photos to come… 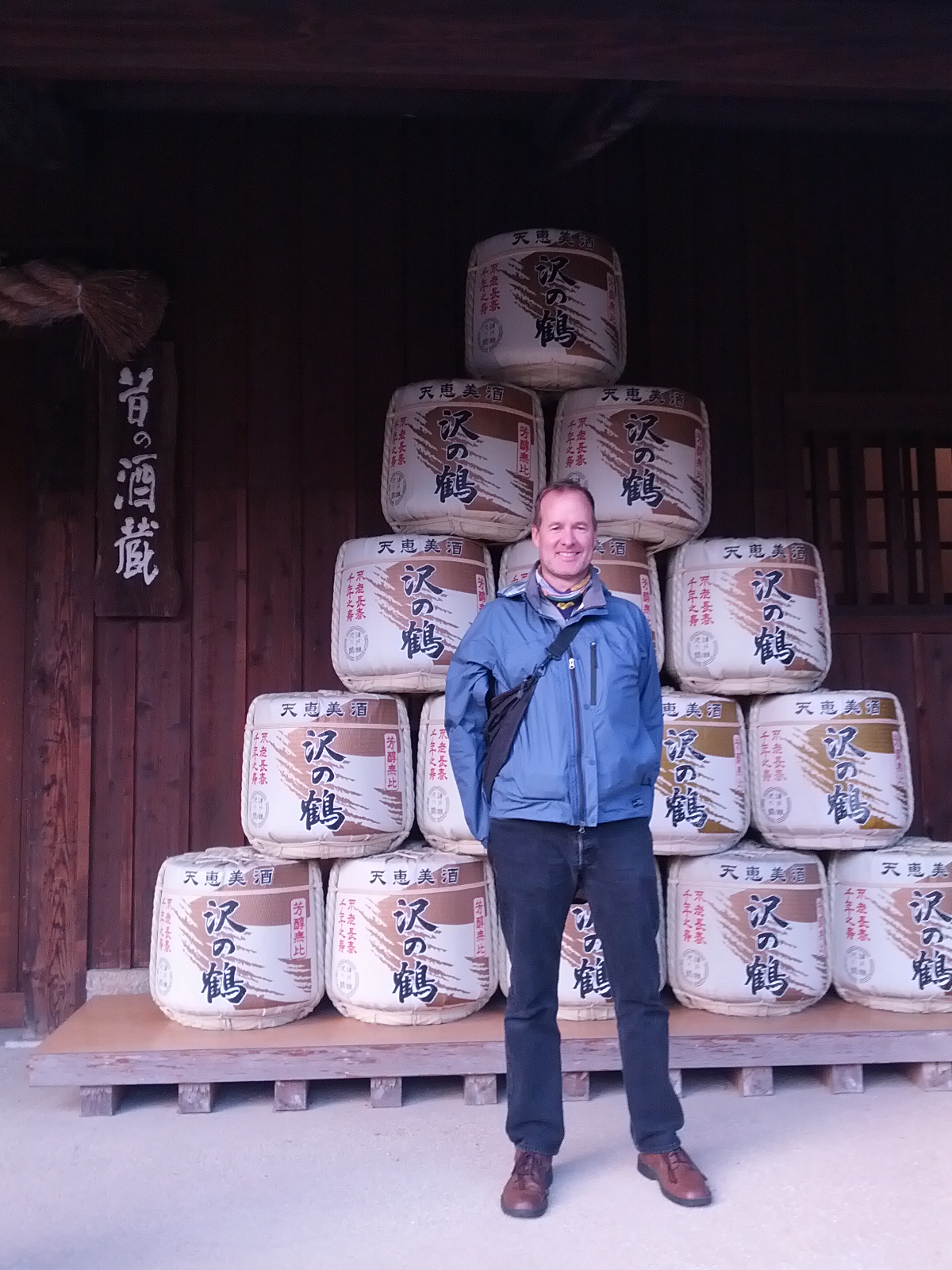 Will get more stories and photos together, yesterday I arrived in Kobe (after a rainy detour through Onomachi, a small seaside town on the local train line)  and spent the day walking around with Susan’s high school fried Junko. Had some very tasty sushi last night. And some Japanese language tips, thanks Junko!

Tomorrow I return to Tokyo for a few hours before going to Narita airport (NRT) for a 787 dreamliner flight to Singapore, followed by an early morning flight to Yangon (Rangoon)

Update: the shinkansen (bullet train) translates to “new trunk line”, and it’s pretty much always elevated, like a modern aqueduct, even in the countryside.
Also, they must clean the bullet nose front frequently, because it’s shiny white (you can see near the crown and sides and top of the train that it’s gray from dirt)

I was fine during the night with a thick comforter, but I was freezing this morning in the common room, wearing 2 sweaters and my hands going number on the computer.

The unusually warm 17C gave way to a cold wind yesterday (though the rain did stop, after my toes got wet walking around in the morning) and today it’s 7C feels like 3C! Staff wasn’t around at 9am.

I was so cold I went out and bought a hot cafe audio latte can from a vending machine (¥110/$1, very convenient) and stood in a sunny spot out of the wind, to warm myself up. 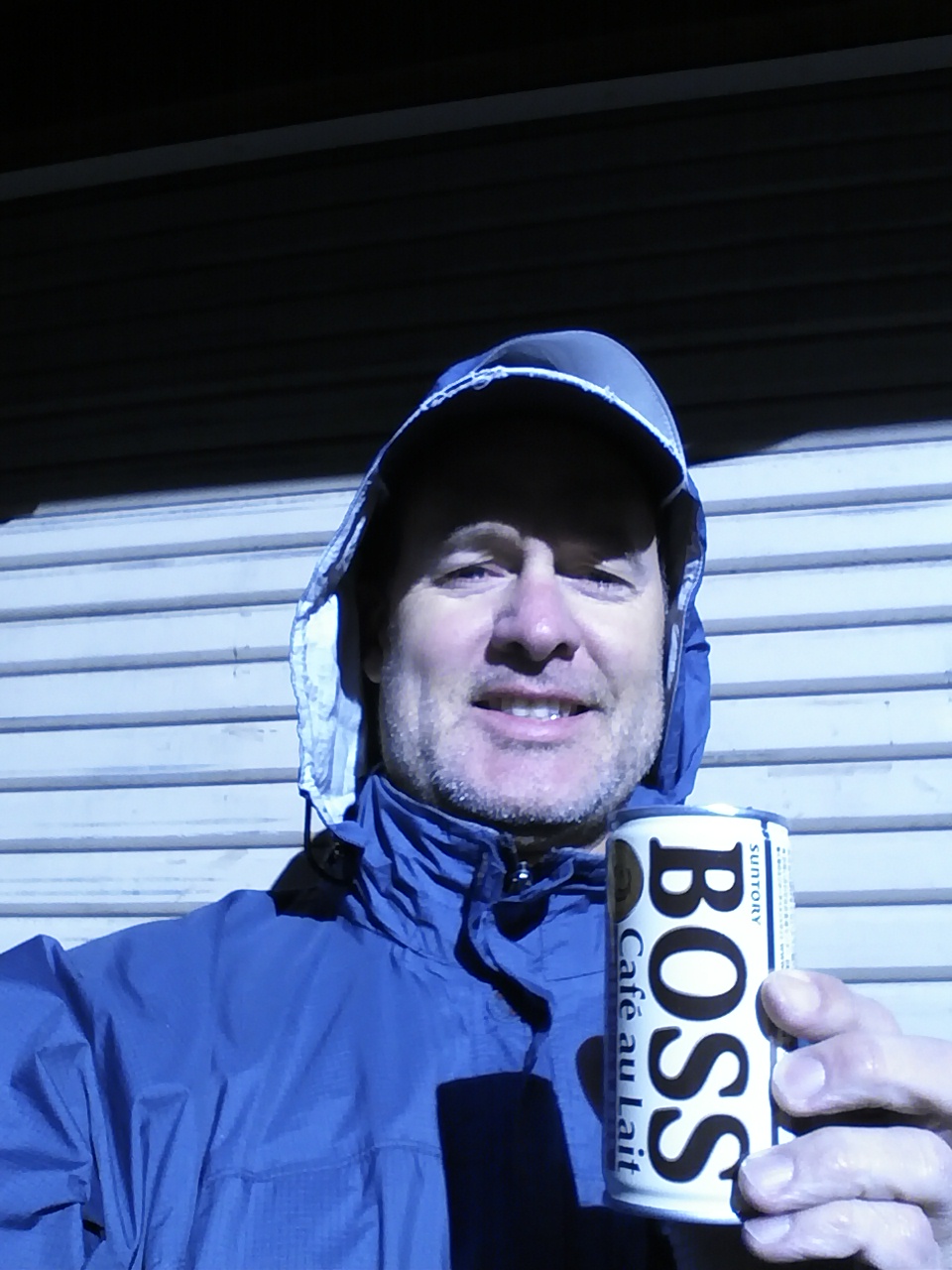 Can’t wait to fly to hot Singapore and Myanmar/Burma tomorrow evening!
As in 30C hot!

I mean I am very much enjoying Japan, and my vocabulary is expanding, just weatherwise I am ready for phase 2 of thus trip.

So after 3 banks couldn’t do a manual Visa cash advance, I called my credit card company again and made my car for emergency access. They transferred me to the issuing bank an they were able to set the PIN for my choice over the phone (something my cc company had said they couldn’t do).
I waltzed down to an ATM with a veritable skip in my step and voila, cash (lots of fees, ie 3% min $10 and almost 20% interest accruing immediately, but that’s irrelevant at this point). Unfortunately this ATM only gave ¥10,000 notes ($90) so this morning I went to a bank to exchange them for smaller bills, for which I had to fill out a form (money in, types of bills back, plus name and address) because I wasn’t a client. The guard/concierge and the teller knew a little English.

They also had an automated machine to change US$ bills into packets of smaller US$ bills (no yen involved) but inexplicably it wasn’t available until 10am (I need smaller bills for Myanmar, hoping they will be newer crisp bills). Will go back while my laundry us drying…
Update: no, it converts yen to dollars (choice of 3 options: $100, $300 or $500 packets of mixed bills). Not what I was looking for.

I hasn’t seen this coffee brand before – definitely not from Seattle! 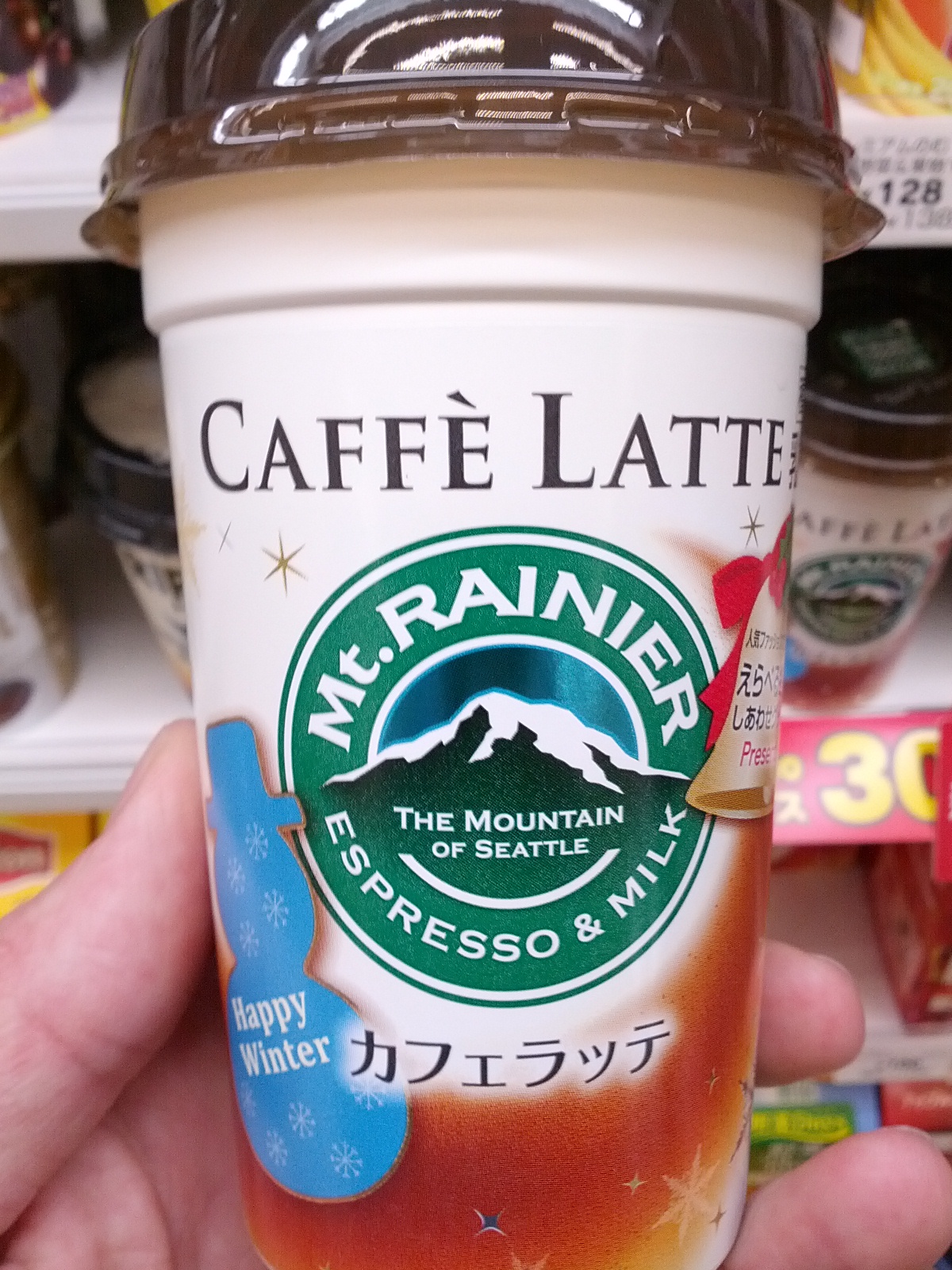 Part 1: After a scenic train ride that brought me to Nagasaki after dark on Saturday, I settled in to my hostel and discovered a voicemail from ANA saying that my bags would arrive in Tokyo that night and be delivered the next day. To me in Hiroshima. Sigh, though admittedly I was expecting that due to the effectively once a day flight between continents.

Side note: Nagasaki train station has a very visible Seattle’s B*st Coffee, plus less visible Starb*cks and T*lly’s, a veritable trifecta. Not to mention Dunkin D*nuts (no thanks). Or a hotel, supermarket, food court etc.

Amazingly, even though it’s Saturday, the town closes up at 8pm, except for Shianbashi, the bar and entertainment district.

Now I had done my planning and preparation on the train, so I had a good idea of what to see and when… and I had decided to forego the slightly out of the way Inasayama tram and lookout (later to learn it was voted one of the top 3 night city views in the world, or maybe just in Japan) to check out Glover Garden with its views of the city and harbour. It was also close to a restaurant I wanted to go to for dinner. Unfortunately the garden was closed at 6pm (it’s only open later during certain periods, like Xmas), so I did not see it or its views or the Madam Butterfly statue (the opera was set in Nagasaki). However, I did get into Shikaisō restaurant (just in time for last order shortly before 8pm – on a Saturday!) to try their champon which is like a curry with rice and noodles and topped with squid and octopus (or at least little bits of them). It cost ¥900/$8 – and that includes tax (no tipping in Japan except for exceptional service).

Then I took the cute streetcar back towards the old town, walking though Shinchi Chinatown (the 3rd largest in Japan, yet tiny compared to the ones in Toronto or San Francisco) to Hamano-Machi which has covered shopping arcades – also mostly closed-for-the-night shops. Wow (at 20:30 on a Saturday). I walked around the bar district a bit, which was full of izakaya, little restaurants, karaoke bars, drunk salarymen in suits and seedy massage offers. I didn’t even feel like getting a drink anywhere, so I headed back through semi-deserted Hamano-Machi and from there it was an easy walk back to the hostel, veering off to walk along the river with its stone bridges, including the Megane-bashi (Spectacle Bridge), so called because the shape of the bridge, combined with its reflection in the water, looks like glasses from an earlier era.

Side note: recall that bashi means bridge… and now learn as I did that machi means town, though it seems that neighbourhood would be more a propos. 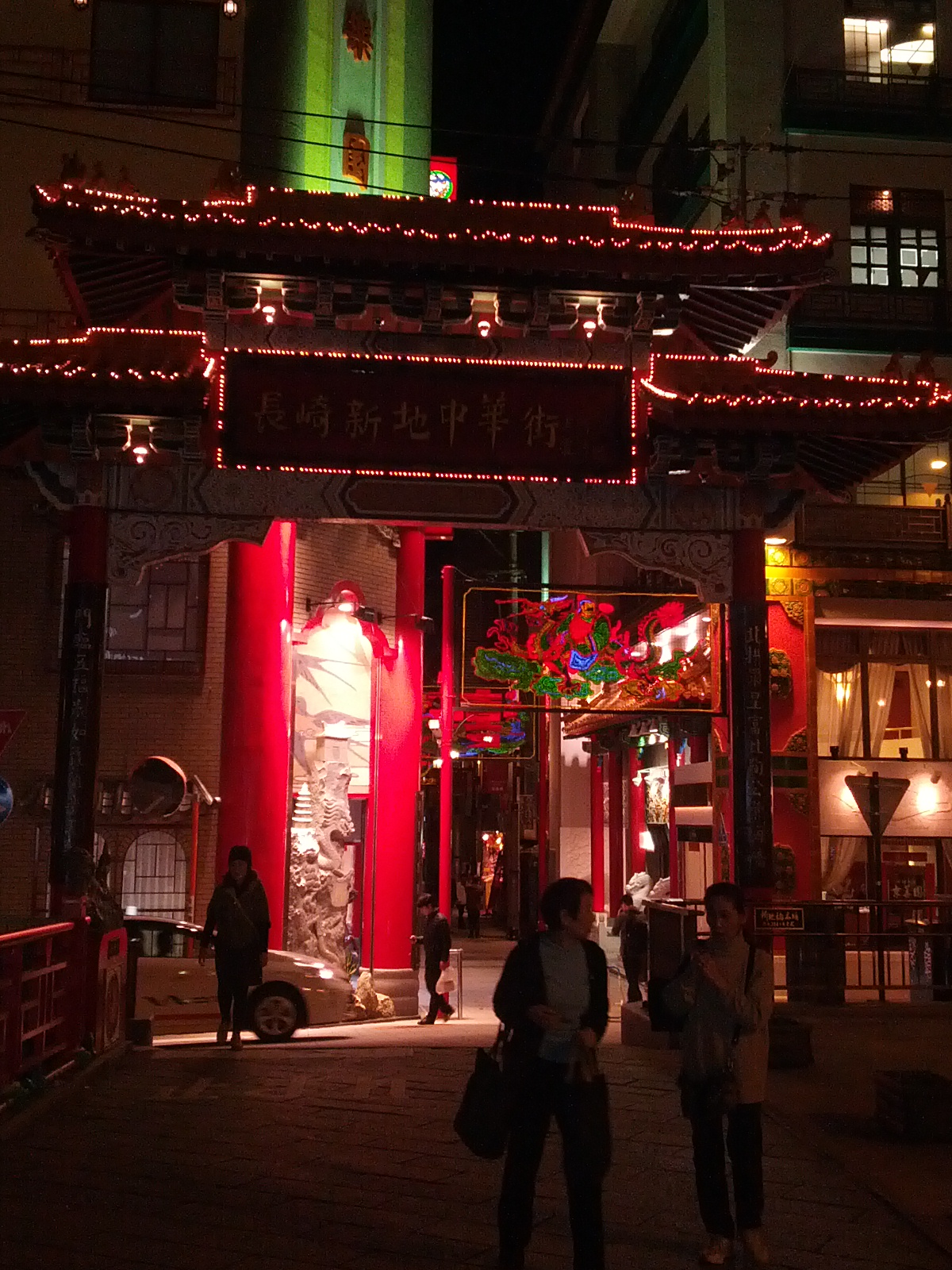